1. Preface
CBZ series explosion-proof axial flow fans for marine use are designed and manufactured according to GB11799-89《Marine explosionproof axial flow fans》,and general description and explosion-proof “d” of GB3836-2000《Electrical apparatus for explosive atmospheres》 and 《Rules and regulations for the construction and Classification of Seagoing Steel Ships》.
This series fans have been examined and proved up to standard by Explosion-proof Inspection Authority of the PRC and have got the certificate of inspection. They have also been examined by the Register of shipping of China and have got the certificate.
2. Application
The explosion-proof symbol of explosion-proof fans is EdⅡBT4  They can be delivered for gas mixtures or vapour containing combustibles and explosives, for ordinary air, for sea air containing salty fog, for air containing oil fog and other corrupt air supply or extracition.
These explosion-proof fan series are best suited to pumping out gas mixtures or vapour containing combustibles and explosives in oil cabins holds, pump-rooms, battery cabins, ammunition cabins, hangars, paint houses ,etc. They can also be used for ventilation of other compartments of shipping and corresponding place of land's.
AC 50Hz,380V or 60Hz,440V type YB-H(explosion-insular) for marine use may be mounted on these fans.
3. Operation Conditions
For places where there are explosive gas mixtures of grade Ⅱ B and group T4.
Ambient temperatures:-25℃~+50℃
Relative humidity of the air:≤95%
Cyclical vacillation:22.5°~45° (Vacillation cycle ５~１０Ｓ)
Sustained horizontal tilting:１５°
Sustained vertical tilting：１０°
Vibration: existent   Shock :existent
4. Structural Types
CBZ type:
There are three structural types :type Ⅰ(deck type),type Ⅱ(piping type) and type Ⅲ(separate cabins type).The construction is spark free.
Type I explosion-proof fan has a hood and an explosionproof motor installed on the top of the machine frame and a wire mesh guard with 2 openings per square inch made of stainless steel, surrounding the frame. The fan is vertically fixed on the deck. It can be delivered for air supply or air extraciton.
Type Ⅱ explosion-proof fan has no hood, built-in type explosion-proof motor is mounted on the housing by the down stream guide vane. It can be installed vertically or horizontally, and can also be installed on the deck. It may be used for pumping or sending air.
According to the customers' special requesting, the fan can be made into a separate structure, i.e. the fan and the motor are put in different cabins, with a driving device ,a sealed box and two pairs of flexible couplings. It is used primarily for exhaust of dangerous compartment.
5. Features
CBZ type:
Explosion-proof, safe and reliable in operation.
Well anticorrosive.
Strongly capable of resisting vacillation,
vibration and shocking.
6. Type Explanation
The type of explosion-proof fans are expressed by the first letter of the Chinese phonetic name, the outer diameter of the vane wheel, the standard speed, and the power of the explosion-proof motor ,etc.
For example:
（CBZ-80A/7.5-1460）I
Where：
C—for marine use
B—explosion-proof
L—centrifugal fan
Z—axial fan
15—the external diameter of the vane wheel in 15cm
80—the outer diameter of the vane wheel 80cm(circle integer)
A—type of the impeller, type A impeller
0.75—the power of the explosion-proof motor 0.75kw
7.5—the power of the explosion-proof motor 7.5kw
2920—standard speed:2920r/min
1460—standard speed:1460r/min
I—the structural type: deck type
7. REMARKS：
The actual performance parameters of type CBZ-I(deck type)will be deviated from those of type CBZ-II,in which their impellers are designed and manufactured by the same way. as consequence of its special structure-larger size outlet ,without down stream guide vane, change direction of air flow, resistance caused by wire mesh guard and the rest. After due consideration, the actual performance parameters of type CBZ-I subject to correction and the method of correction as follows.
correction coefficient of flow rate: fQ =0.8～0.9.
correction coefficient of pressure(total of static pressure): fP =0.7～0.8
for example:
A set of performance parameters of type CBZ-80A listed in the table 4 is: rate flow:30000m3/h ;total pressure:370Pa;Staic pressure:210Pa.
With due regard for the influence of the special structure, Type CBZ-80A(I)will be revised as mentioned above; and the result of correction as follows:
Rate flow:30000·fQ
Total pressure:370·fP
Static pressure:210·fP
Those of Type CBZ-80(Ⅱ)need not be revised.
8.Fan type example photo：   TYPE-I:                    TYPE-II:                      TYPE-IV:                         TYPE-V: 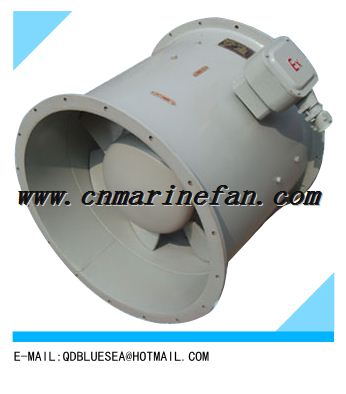 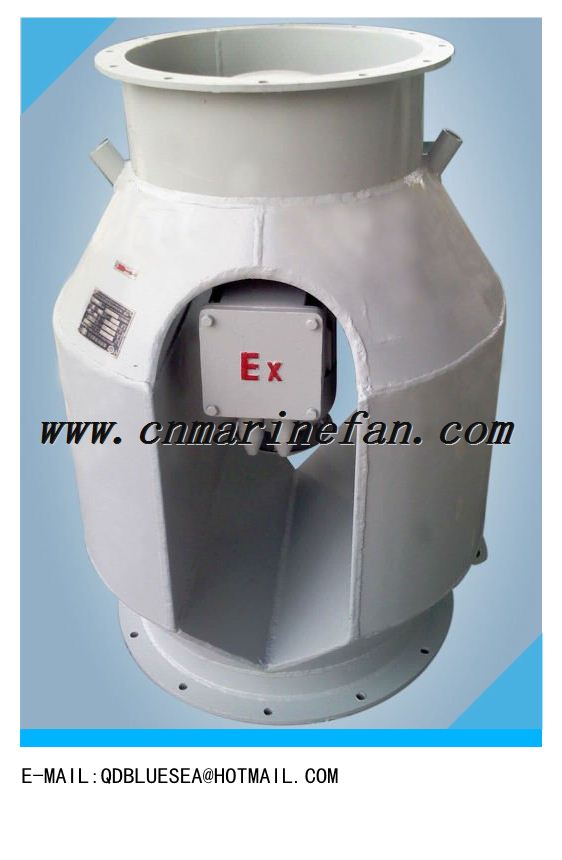 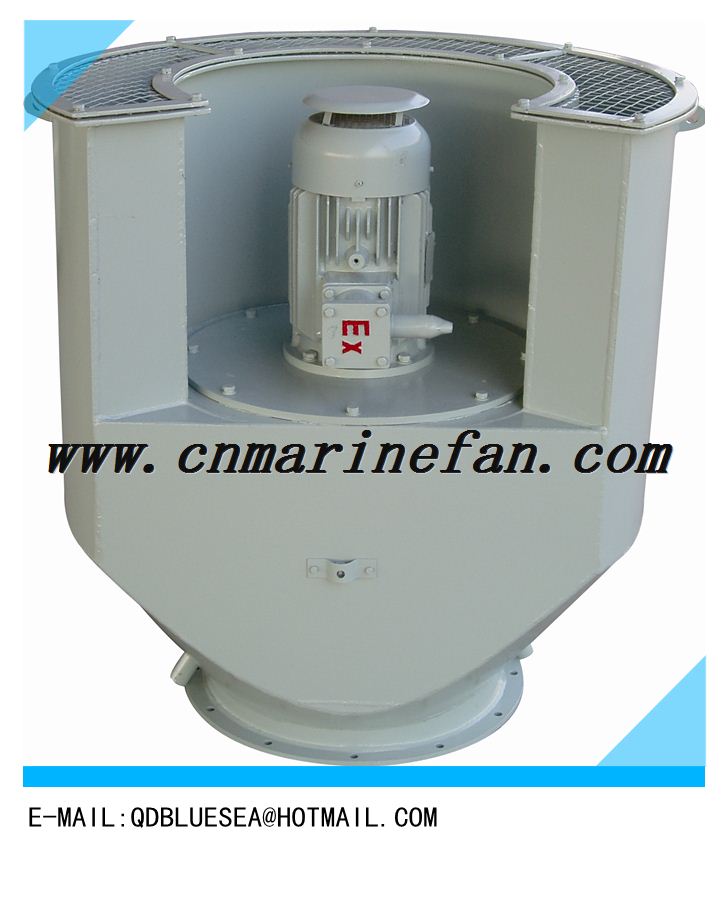 Please contact us and get detailed Technical parameters and Drawings.
We could Design and Produce the Marine fan,Industrial Fan,and Other Ventilation Equipment according to your detailed requirement !